Recently, we were able to try out one of the Crossbow Caddys from D’s Gear. This is not just a normal sling, but rather a system that allows for the even distribution of weight across the user’s shoulders. There are three different models available from D’s Gear and each are discussed below.

The Crossbow Caddy works by having the user place a pad on top of their shooting shoulder, and then bring a strap around under their offhand shooting arm. It may sound a bit awkward, but it was actually very easy to do. There is then a strap that features a heavy plastic buckle that hangs down from the shooting arm. This buckle is meant to attach through the foot stirrup of your crossbow and allows for hands free carrying down the side of your body. 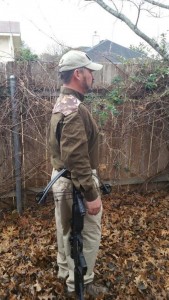 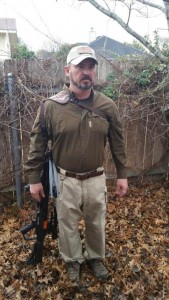 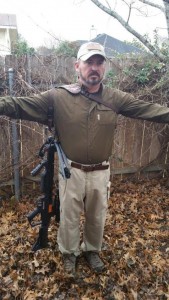 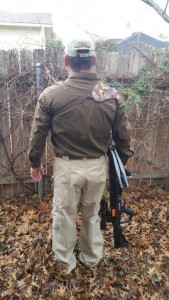 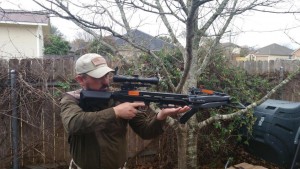 We found this to be much more comfortable to carry the crossbow than the regular sling configuration as there was no pistol grip or scope to bite into your back. In this configuration, the crossbow is carried facing straight up, so you cannot use the crossbow while attached to the sling, nor should you have the crossbow cocked while carrying on this sling.

The “ATR” stands for “at the ready”, meaning this is a sling designed to allow for carrying a crossbow cocked and loaded in the event a shot presents itself. This does not have the shoulder pad on top of the shooting arm, but is rather a cross-body sling that holds the crossbow in a down facing position allowing it to be carried in a loaded configuration. This is a single sling that goes over one shoulder rather than distributing the weight between both shoulders. We didn’t get to try this one, but the strap looks wide enough that it shouldn’t create any pressure points while using.

All in all, the line of Crossbow Caddys is going to allow you to carry your crossbow much more comfortably than with a traditional sling. Another big advantage is that the crossbow is carried much closer to the body, whether in the upward facing or downward facing configurations. This is a huge bonus to the hunter that has to move through any level of brush or cover as the crossbow is much less likely to get hung up. The line of Crossbow Caddys is very reasonably priced and is offered in models with good comfort and excellent utility. It would be nice to see some type of padding offered for the Deep South hunter that might be in much lighter gear, but for anyone wearing a jacket or thick hunting gear, comfort should be no issue. This is definitely a sling we would have on our Christmas list.