What is a reverse-draw crossbow?

A reverse-draw crossbow is a crossbow that has its limbs ‘reversed’ from the typical crossbow configuration. If this sounds like an overly simple definition, that is likely because it is, but it lays the groundwork for a more thorough description.

The riser, which in a typical configuration is at the end of the barrel, is now placed well back on the frame, sometimes even behind the trigger. As a result, almost every reverse draw crossbow is going to be in a bullpup configuration, where the trigger is moved well forward on the crossbow, and more of the weight is kept closer to the shooter’s shoulder. The limbs come out from the riser and point forward and the bowstring is almost to (if not past) the end of the barrel when at rest.

Reverse-draw crossbows have actually been around for quite a few years, and have a number of advantages over conventional crossbows, yet not many people have much experience with them. First though, here are our top recommended reverse crossbows:

Ballistic Data Comparison For The Reverse Crossbows Above

What are the advantages to a reverse-draw crossbow?

A reverse-draw crossbow actually enjoys many advantages over traditional crossbows. In the following paragraphs we will discuss these in detail.

Because of the design of the reverse-draw crossbow, the string is much closer to the end of the barrel when at rest. This means that a much longer power stroke can be engineered into the reverse-draw system, which translates to a longer contact time with the arrow resulting in higher arrow speeds for a given draw weight.

Just as the longer power stroke allows for less draw weight to generate arrow speeds comparable to heavier draw-weight crossbows, it also allows for much greater speed should you increase the draw weight. There are reverse-draw crossbows that generate over 400 fps while using limbs under 200 lbs. of draw weight.

Although the specific design of the reverse-draw crossbow will not necessarily be quieter, the fact that it can take advantage of the longer power stroke to achieve a given arrow velocity with a lower draw weight will inherently make it quieter. To simplify this, the lower the draw weight of the limbs, the less energy is released when firing. This results in less shock and vibration, and thus less sound.

As the riser is shifted well back towards the shooter on a reverse-draw crossbow, the center of gravity is also shifted back as well. As more of the weight shifts back towards the shooter, this results in a greater level of control, and as such, a greater level of accuracy. Any time there is less weight to be supported by a shooter’s forward arm, there will be less movement and/or wobble resulting in tighter groups and less fatigue. This also allows a hunter to keep the weapon shouldered for a longer period while waiting for that perfect shot or the target shooter who is making multiple shots to do so more comfortably.

As the reverse-draw design typically features parallel limbs, this results in a much narrower crossbow when measured from axle to axle (the outer most points on each limb). This allows a hunter to maneuver a crossbow in areas that previously might only have been available for a rifle hunter, or perhaps a vertical bow. There are even reverse-draw models that are as narrow as 10” wide when cocked.

What are the disadvantages to a reverse-draw crossbow?

Although the below list may seem minor to some, it is still important to understand the limitations you may face when selecting a reverse-draw design. They are as follows:

Must go with OEM strings and cables.

As the power stroke is much longer on a reverse-draw crossbow, you are not going to find much selection in terms of aftermarket cables or strings. This is something that would likely only affect some of the most sophisticated shooters, but it is still something to keep in mind.

No recurves, only compounds.

There are some shooters who prefer the simplicity, and inherent reliability, of a recurve crossbow. Just about every commercially available design for a reverse-draw crossbow is a compound bow design. As most reverse-draw systems use a more parallel limb design which isn’t suited for a recurve, you are going to have to go with a compound limb if you want the reverse-draw system.

What are some of the best reverse-draw crossbows out there?

Below will discuss four of the most popular reverse-crossbow models along with basic information on each. Please note that these are in order of arrow speed and not in order of preference as each can have great qualities depending on the need and the shooter. For a more detailed look, please click the link under each to read the full review. 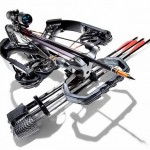 The Barnett Buck Commander Raptor Reverse comes in as the lightest in overall weight of our selections (see Amazon.com price). It also is the slowest, at 330 fps., but that is not always a bad thing. Too much speed can cause a shooter to miss as there is much less margin for error. The BC Raptor Reverse still puts up an impressive 97 ft. lbs. of kinetic energy at the muzzle, so there will still be plenty of punch to get the job done. Read our full review of the Barnett BC Raptor Reverse. 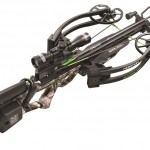 The Horton Storm RDX is the narrowest in terms of ATA of our selection of recommended crossbows (see Amazon.com price). At only 10” when cocked, this is going to allow you to hunt in many places you have not been able to use a crossbow before. It employs a shorter power stroke than some others, but the 165-lb. draw weight still generates 370 fps, resulting in around 122 ft. pounds of kinetic energy at the muzzle. You can also use the ACUdraw crank cocking system which calls for minimal effort to cock allowing for smaller framed shooters to still cock this with ease. Read our full review of the Horton Storm RDX. 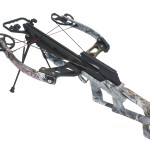 The Scorpyd VTEC Extreme is specifically designed to be a target crossbow (not that you couldn’t have a great hunt with it if you wanted). It is the heaviest of our recommendations at well over 8 lbs., but its primary design is for pinpoint accuracy (see Amazon.com price). The VTEC is a bit wider than its sibling, the Orion Extreme as the added ATA width is more forgiving in terms of accuracy. It has the longest power stroke (along with the Scorpyd Orion) of 18.5” giving it the greatest speed for any given draw weight of our recommendations. It is available in a range of draw weights from 110 lbs. all the way up to 175 lbs., yielding speeds of 370 to 440 fps. This translates to a kinetic energy range of 121 up to a whopping 173 ft. lbs. at the muzzle. The VTEC features a folding stock which means you will not be able to use a crank cocking system on it. Read our full review of the Scorpyd VTEC Extreme. 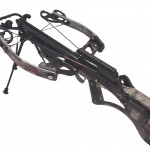 The Scorpyd Orion is the hunting equivalent to the Scorpyd VTEC (see Amazon.com price). Where the VTEC was designed with a wider ATA for a more forgiving nature, the Orion was designed to be narrower (by almost 3 inches) to allow for greater maneuverability in the field. Like the VTEC, the Orion has an 18.5” power stroke and can be purchased in draw weights from 110 to 175 lbs. The speeds are equivalent ranging from 370 to 440 fps, and the kinetic energy range is the same as the VTEC as well. Aside from being narrower, the Orion has a fixed stock which allows for the use of the AcuDraw cocking system. Read our full review of the Scorpyd Orion.

Every crossbow shooter is going to have unique needs in terms of draw weight, speed, impact energy and even overall weight. It is important to consider your individual shooting needs when evaluating a crossbow for target shooting or for hunting. It is also important to not get caught up in the “faster is always better” mentality as it takes a very well-trained and experienced shooter to handle speeds approaching 400 fps and above. It is also important to realize that, even though the draw weights are relatively low, the kinetic energy generated by the reverse-draw design may be way too much for a novice shooter.

Additionally, it is important to know whether you are someone who is comfortable “stepping outside the box” in terms of crossbow design. Although the reverse-draw crossbow can have a number of advantages over their more traditional counterparts, new and radical designs aren’t for everyone. While many shooters will find the reverse-draw design cool or even sexy, there are many folks out there that will not be able to get past the looks and will not care for it.
Only you can know what is truly best for your individual shooting needs. What we have done in this article is to help you learn the differences in the reverse-draw design from traditional crossbows to help you better decide if it is right for you.