Most crossbows you purchase will come with the prod already strung, so you likely won’t need to take any action to start shooting “out of the box.” It’s important to keep in mind, however, that the average lifetime of a crossbow string is approximately 200-600 bolts fired, depending on the manufacturer, the exact model of the crossbow and string quality, and how well you care for your crossbow. As such, you are likely to find yourself in need of re-stringing your crossbow every once in a while.

In addition, if you own a crossbow with limbs made entirely out of wood, you should remove the string each time you have finished shooting and then string it again before your next shooting session. That’s because wooden limbs tend to lose elasticity fairly quickly. Luckily, most modern crossbows come with limbs made with laminated fiberglass, which are resilient enough that you can keep them strung for as long as you want.

How To String a Crossbow

Below are the five steps you will need to take. Please make sure that you have a crossbow stringer, as it is the best and safest way to string any modern crossbow.

Step #1:  insert one end of the crossbow string onto one of the limbs of your crossbow, and make sure that it is firmly and tightly attached to the tip. Take a look at the image below: 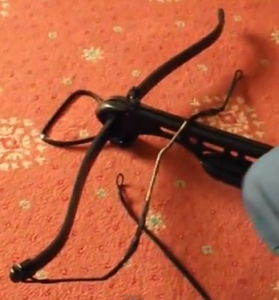 Step #2: take your crossbow stringer and attach both of its ends to both tips of the limbs. So right now you have only 1 end of the actual string attached, and 2 ends of the stringer attached. See the image below:

Step #3: next you will cock the crossbow by placing your foot in the stirrup and pulling the crossbow stringer until it is latched (cocked). While doing this, make sure that the loose end of the actual string does not get accidentally caught anywhere and that it remains hanging freely below the riser/limbs. 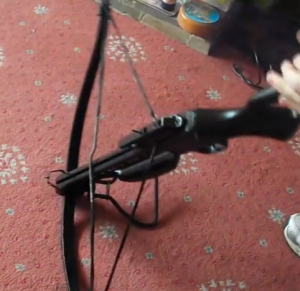 Step #5: uncock the crossbow by either firing an arrow/bolt into a target or manually (do it very slowly). You’ll notice that the stringer will come off of one limb very easily, however you will need to use some force to take it off the other limb, as it will be held down tightly by the newly attached string. If needed, you can use a screwdriver to help you slightly loosen up the string end so you can remove the stringer from beneath it. Make sure not to use a knife or anything sharp as you might accidentally damage the string and make it useless.

Questions About The Process?

If anything above is unclear to you or if you require further assistance on how to string your crossbow, please leave a comment below and I will personally reply to it within 12 hours at most.