We recently had a chance to hit the range to try out a few rail lubes and string waxes to see if they really can make a difference on speed. We chose to test multiple products under real world conditions on the same day to make things as fair as possible. One of those is a product called the Dead Down Wind Speed Stick. 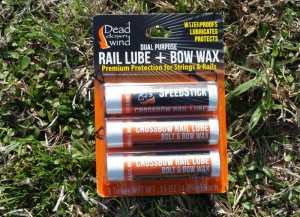 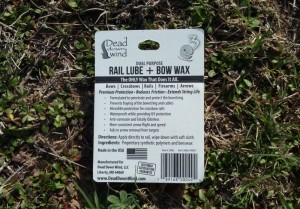 The Speed Stick came conveniently packaged as a 3 pack, which is always a good thing…one for the crossbow case, one for the hunting backpack, and a spare (because we seem to be better at misplacing things than we would like to be…). The Speed Stick is ready to apply using a Chapstick–like tube which just about everyone in America is familiar with. Simply break the seal, twist the bottom, and you are ready to go.

We found the Speed Stick went on easily and evenly, and we only had to run a finger down the rail and it was lubricated and ready to shoot. It was nice that the application method as well as the product itself made for non-greasy hands after applying.

So how did the Speed Stick affect our shooting? We found that when using our 425 grain test arrows, we didn’t really see any difference in speed or accuracy. Our arrows were shooting at 321-322 fps prior to application, and shot in that same range after application.
You might be thinking, “Shouldn’t it be faster?”, and we would certainly understand that question, but in our experience, often times string and rail lubricants can actually slow your arrow down a bit if they are applied too heavily.

It is important to remember that the primary purpose of a rail lube isn’t necessarily adding speed, but rather to protect your string and serving from the intense friction of running down the rail. You may not have every paid super close attention, but if you look, you will notice that most crossbows actually have a little down pressure on the rail from the string. This is done to keep the string always going on a consistent path to ensure better accuracy. This down pressure can create a LOT of friction which could lead to premature string and serving failure.
Rail lubes are designed to minimize this friction and extend the life of the string. The fact that it doesn’t make your arrow faster is not a failure of the product to do its job…its job is to lubricate and thus protect your string and rail.

We found the Dead Down Wind Speed Stick to be easy to apply and not overly greasy on the hands afterwards. The Speed Stick did not affect our speed or our accuracy but did provide good lubrication to the rail. It lasted multiple shots and did not have to be reapplied as often as some other lubes we have tested.

All in all, it does its job and isn’t a mess to use, so we would be comfortable in recommending this for your hunting or range kit. 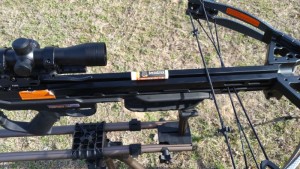