It was a beautiful day in South Texas recently so we took advantage of the warm, late winter weather to head out and do some shooting. One of the products we were set to test was the ProChrono Chronograph, which is designed to give you exact fps (feet per second) measurements of projectiles, whether it be bullets, BBs or arrows.

The ProChrono arrives in a small rectangular box that really doesn’t weigh a whole lot. It is a convenient size to allow you to easily pack it in with your shooting supplies anytime you are wanting to make comparisons of projectile speeds. Especially when dealing with arrows, knowing the speed of your particular bow using your specific arrow and point configuration will allow you to be very accurate at multiple yardages. 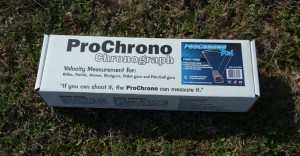 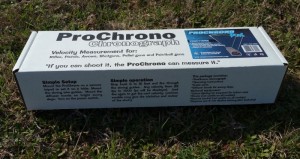 The ProChrono Chronograph is made from light duty materials to keep down the weight. This is not an issue with quality or durability as this is a scientific instrument more than a hunting accessory. We actually liked how light the system was since, in the event it is dropped or knocked over when set up, there is less likelihood of damage to the unit. It should be noted that the steel rods used to align the unit are quite strong and would require a bit of effort to bend.

The ProChrono is a fairly simple and straight forward design that is meant to get you going in very short order. We really liked that it came with a screw mount designed to fit on an ordinary tripod which made setting it up at the proper height incredibly easy. It was also a neat touch that the battery compartment actually has a spot for a spare battery which made a lot of sense to us.

It is an important detail that there is not an auto shut off, so you will want to pay attention and be sure you turn the unit off when you are done. We used it for about 6 hours and had plenty of battery left, so if you pack that spare, you should not have any issues with enough run time. 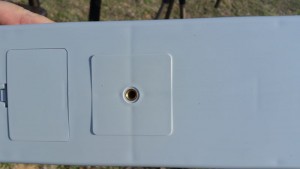 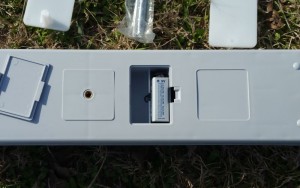 Ease of Set Up

The ProChrono was very straight forward and easy to set up. We actually only needed to consult the instructions to ensure we had done everything properly and to know the various readouts meant. Essentially, once you get all of the materials out of the box, you simply open the lower case and insert a 9-volt battery (not included), close the case, insert the four steel alignment rods in the slots on each upper corner of the unit, and attach the shields above. It really was as quick and simple as it sounds. 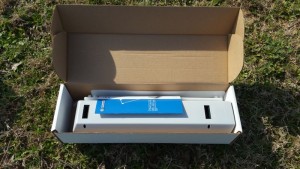 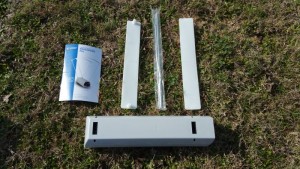 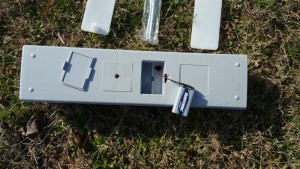 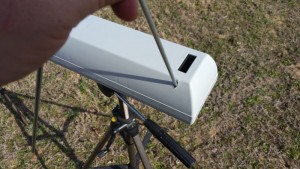 Once the unit is set up, simply place it on a flat surface at a comfortable shooting height (or as we mentioned before, mount it to a camera tripod), and you are ready to go. 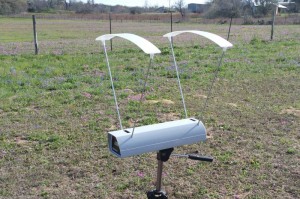 The ProChrono Chronograph was about as easy to use as any instrument we have tested. Once you get the unit assembled and set at the proper height, using it is as simple as turning it on (with the switch on the side) and placing the crossbow at the appropriate distance and aiming through the alignment sticks. The instructions recommend you place the unit at least one arrow length in front of the crossbow to ensure the arrow is not still accelerating when it passes through the sensor zone. 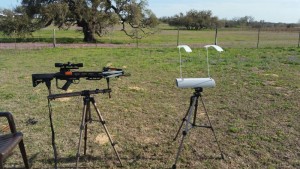 We found the unit to be very precise in its measurement as we took an arrow with a total weight of 424.2 grains and fired the same arrow 4 times to test the consistency. The results were 322 fps, 321 fps, 321 fps, and 322 fps. Being within a foot or two per second is certainly plenty accurate to know what you are working with in terms of speed!

We found that the fact the unit did not have an auto shutoff was actually as positive feature for us as we could take our time with photography and recording results and then simply load and fire without having to remember to turn the unit back on. The photo below showing the “0” is the initial readout you get when you turn the unit on to let you know it is ready to go. 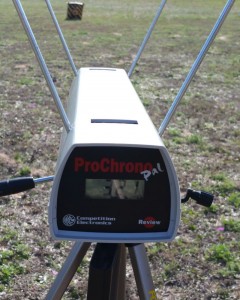 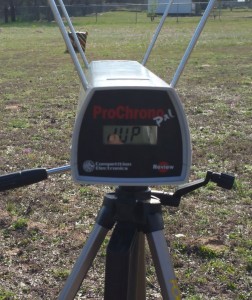 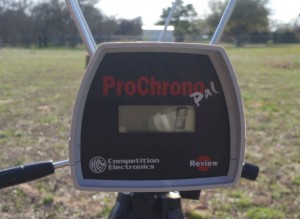 The ProChrono Chronograph is a tool that we found (and are still finding) very useful. It allows you to accurately measure the speed of your arrows to such a degree that you can much better understand how the slightest changes to your crossbow or to your arrows can make a great difference in arrow velocity.

This is a tool that we would strongly recommend for any serious archers, and even for beginner archers, as it is going to tell you how fast you are actually shooting rather than just what the manufacturers state the velocity of your crossbow should be. Knowing this is going to allow you really understand where your crossbow is going to be hitting and allow you to make more accurate shots at a greater range than you could otherwise.

We also found it very useful to understand how the slightest modifications can make a big difference in arrow speeds. Some of the things we noticed that made a big difference included string silencers, slight variations in arrow weights and even when a bit too much rail lube was applied. You can read more about these in upcoming articles.
All in all, if you can add this to your Christmas or birthday list, you aren’t going to be disappointed and may just find that you spend a lot more time than you ever imagined playing with new combinations to get your speed right where you want it. 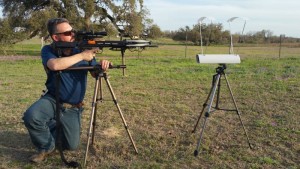