Southern Crossbow gears their bows towards a tactical platform and claims to offer everything in their package for “the ultimate crossbow experience”. Based on what we saw, we have to agree. The XLT 385 comes with a 4x32mm crossbow scope, a 6-bolt quiver, four field tipped 400-grain bolts, rail lube, and even safety glasses…not to mention the vertical fore grip! This last item really did let us know that these guys were serious when they were gearing towards a tactical platform.

Kinetic Energy of the Risen XLT 385 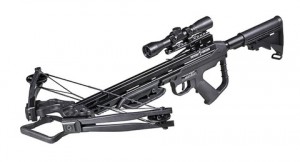 The guys at Southern have gone a bit of a different direction in their crossbow design, aiming to offer a crossbow with the look and feel of a tactical rifle. They did a good job of hitting it on the head. When we first opened our package, we had to wonder whether we had actually ordered an AR rifle rather than a crossbow…the look is just that similar. This is a great crossbow for anyone who has a strong familiarity for an M4 rifle. The feel of the pistol grip, the adjustable rear stock (with Mil-spec buffer tube) and even the included vertical fore grip leave you with an instant comfort when shouldering the XLT 385. The inclusion of an anti-dry fire safety yields an added measure of confidence. The scope mounts on a rail above (weaver style) and the included picatinny rail underneath allows for the addition of a light or even a bipod. We wish the safety was located where it could be released with the shooting hand, but this isn’t a deal killer. The XLT 385 shot good groups and was very consistent in its performance.

Hunting with the Risen XLT 385 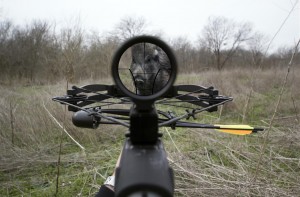 Hunting with the XLT 385 promises to be a lot of fun. With the familiar feel of the 385, this is going to be one that allows for very rapid movements as well as solid, well-placed shots. Depending on your hunting situation, (stalking hogs from a truck) you may even opt for a holographic reticle site for ultra-fast target acquisition. You can tell the guys from Southern probably had this in mind living in deep South Texas. The power generated by the 200 lb. limbs should offer no worries about penetration, and the rail underneath allows you to add a light for night shots.

The XLT 385 is actually very quiet, especially factoring the power behind this bad boy. Maybe it was the fact that I was holding an AR platform and was expecting a huge BOOM, but the 385 actually felt much quieter than a lot of crossbows out there. The company claims the cam design has something to do with it, and I am a believer.

Southern’s XLT 385 is fairly straight forward and easy to cock. For a 200 lb. draw weight, we actually found it much easier to cock than expected. Given the amount of force on the limbs, you really will want to use the cocking rope…and probably pick up a spare just in case!

The Risen XLT 385 includes a 4x 32 mm scope. It isn’t the fanciest out there, but it will certainly work for most of your needs. The graduated reticle is great and it was super easy to zero in…within about 10 shots we were consistently punching the bullseye. If you are really wanting to take this crossbow to that next tactical level, I would seriously consider looking into an illuminated reticle, though.

What Arrows to use with the XLT 385

Southern recommends using either a 20” or a 22” arrow with the 385. The package comes with 400 grain arrows, so that is a good starting point. Southern is very specific to mention not using anything below 350 grains of weight, as given the extreme punch of this crossbow, they could actually cause the bow to dry fire from not enough resistance.

Southern’s standard warranty is lifetime for the original purchaser on everything except for limbs, cams/wheels/axles, strings, cables, and the shooting glasses. The warranty on the limbs and cams/wheels/axles is 5 years from the date of purchase. Registering the unit online is fairly simple and straightforward. As with most warranties, cosmetic damage caused by the user is not covered.

The Southern Risen XLT 385 is more than capable for what most folks want to tackle. This is a precision weapon and is capable of great accuracy with enough power to take long-range shots with a bit of practice. The design makes for an incredibly comfortable, and for those used to shooting an AR platform, also a very familiar shooting experience…even if you have never shot a crossbow before. The overall feel is one of a very solid, well-built crossbow and the picatinny rail is really great for customization, which is something that AR guys really love. I know you shouldn’t buy a crossbow based on looks…but this thing is just sexy. Of course, I am also an AR guy, so you would expect to hear that from me! With an MSRP on the Southern site of $839.99 for the total package, this is well within reasonable compared to comparable crossbows. Take a look at today's amazon.com price on this crossbow and check out our top 10 crossbows rankings for more.