Like many other Mission models, the Mission MXB-400 comes preassembled in an included soft nylon pouch to help keep your crossbow clean and your gear together. The four package levels offered by Mission are the same as on the MXB-360: the Beginner, the Basic, the Hunter and the Pro. All include a nylon case, scope, 3 custom weighted arrows, and a quiver. Each package level is differentiated by the quiver (a Bohning Lynx quiver on the Beginner package and a Mission MX3 quiver for the other three package levels) and by the optic supplied. The optics are discussed in more detail in the Optics section of the review.

Kinetic Energy of the MXB-400

The MXB-400 is the choice for speed freaks! With 400 fps using a 400 grain arrow, this is serious punch down range. You can expect energy approaching 142 ft. lbs. when firing this bad boy…go hunt you what you want, this can take it!

The MXB-400 uses the same basic stock as the MXB-360. The skeletonized stock and rail reduce weight, and the auto safety gives you extra confidence when cocking the MXB-400. The innovative X-cams add to the high-speed punch of this crossbow and there is even a picatinny rail included on the underside for mounting accessories. The MXB-400 is available in 4 colors: Tactical black, Lost AT, a snow pattern and even a pink camo pattern! The forearm has a nice meaty feel and has a flange above it to keep your hands and fingers clear of the string.

Ballistic Data For The Mission MXB-400

Hunting with the MXB-400 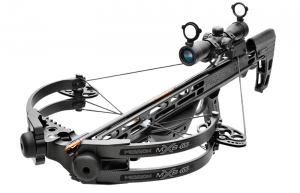 Hunting with the MXB-400 promises to be an absolute pleasure. With its light weight and adjustable stock, remaining in a shooting position is not the tiring experience as found with so many heavier crossbows. Like other Mission Crossbows, there is no stirrup, reducing the overall length. The potential drawback here is having your arrow hanging too far out in front of the limbs and potentially hooking it on a branch or your blind when in tight quarters.

This is a small price to pay given the light weight and power of the MXB-400, but certainly something you will want to think about. Like the MXB-360, the absence of a stirrup means that when raising or lowering the crossbow from a tree stand, you attach a rope to the buttstock resulting in the crossbow always pointed down and away from you…much better than having it pointing at you!

The 400 is actually very quiet, especially given the power being unleashed when you pull the trigger. There isn’t the sharp ‘slap’ you might expect from a crossbow which is a pleasant surprise…or maybe not a surprise given how quiet the MXB-360 is.

The MXB-400 is very easy and smooth to cock. The PCC, or Positive Cocking Control, provides a deep rope groove to secure the rope when cocking and the location of it (underneath rather than above) ensures there is no chance of the string hooks riding over the rail. The auto-safety is engaged during the cocking process giving an extra margin of confidence.

The RS-tread machined into the back pockets of the limbs makes for a comfortable foothold and because the bow is a bit further from your body as you cock it, you will find that you don’t have to lift and stretch as far to fully cock it. You can also add the Silent Draw System to the MXB-400 which makes cocking the bow as simple as cranking a fishing reel! 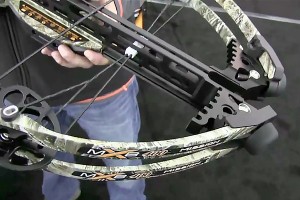 What Arrows to use with the MXB-400

Each MXB-400 comes standard with three 22” arrows. Given the punch of this crossbow, you really want to be shooting arrows that are at least 400 grains, and the metal half-moon nocks are a necessity to avoid arrow failure. Not using the half-moon knocks could result in the splintering of arrows and resulting failure of the bow string!

Mission’s standard warranty is lifetime for the original purchaser on everything except for wear parts. Registering the unit online is fairly simple and straightforward. As with most warranties, cosmetic damage caused by the user is not covered.

The MXB-400 is an absolute powerhouse, which is made more impressive by its compact size and light weight. It is easy to carry and easy to cock (even easier if you add the Silent Draw System). Given the speed and power of this crossbow, you should feel very confident in taking just about any game in North America. The design of the forward grip gives a solid hold and the range of colors offered allows you to customize this crossbow to your personal taste.

The picatinny rail is really a nice added feature as you could put a good light underneath to allow for hog hunting while having a bow that delivers enough oomph to go after that trophy boar. Just be sure you really want this one, MSRP is $1199 for the bow only! Take a look at today's amazon.com price on this crossbow and check out our top 10 crossbows rankings for more.