The Mission MXB-360 comes preassembled in an included soft nylon pouch that makes it much easier to keep your gear together. There are four package levels offered by Mission: the Beginner, the Basic, the Hunter and the Pro. All four include a nylon case, scope, 3 custom weighted bolts, and a quiver. The difference in each package revolves around the quiver (a Bohning Lynx quiver on the Beginner package and a Mission MX3 quiver for the other three package levels) as well as the quality of the optics supplied. The optics are discussed in more detail in the Optics section of the review.

Kinetic Energy of the MXB-360

The MXB-360 brings some serious power to bear with speeds up to 360 fps. This means a whopping 115 ft. lbs. of energy using a 400-grain projectile. This should be plenty of punch for just about anything you might want to hunt.

Ballistic Data For The Mission MXB 360

The MXB-360 utilizes a skeletonized stock and rail to reduce weight. Its anti-dry fire system offers an added level of assurance but you must remember to manually engage the safety after cocking the crossbow. This is something you may need to think about each time if you use more than one crossbow, but will quickly become habit if this is your primary crossbow. The forearm design does a nice job of keeping your hands and fingers away from the rail.

Hunting with the MXB-360 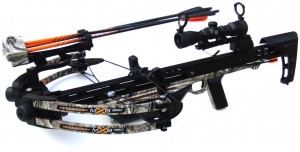 It is very important to understand how a new crossbow is going to perform in the field under real world conditions. The MXB-360 is set to excel as a hunting crossbow. Its lighter weight will keep you from tiring while holding it, even if you need to have it shouldered for a prolonged period while a shot presents itself. One feature I really like is that, since the 360 doesn’t have a stirrup, you attach a rope to the buttstock when raising or lowering from a tree stand. This means the crossbow is always pointed down and away from you…a much safer scenario than having it pointing at you! One potential drawback is that, due to the rail design, you really need to use mechanical broadheads. Fixed broadheads could potentially hang or ride up when fired yielding a loss of accuracy at best…let’s not think about worst!

The 360 is one of the quietest crossbows we have tested in quite some while. There is a very muted ‘thud’ when firing as opposed to the sharp ‘snap’ so often associated with crossbows. It really sounds more like a vertical bow than a crossbow. 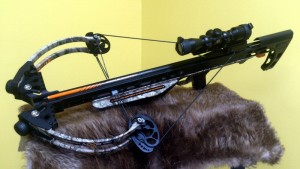 The MXB-360 was quite easy and smooth to cock. The PCC, or Positive Cocking Control, provides a deep rope groove to secure the rope when cocking. The underside location of it ensures there is no chance of the string hooks riding over the rail. There is also a satisfying ‘click’ when the unit is fully cocked, meaning you never have to wonder if it is fully engaged. The tread machined into the back pockets of the limbs makes for a comfortable foothold as opposed to a stirrup. You may find you have to bend a bit further to start the cocking process, but this actually ends up being an advantage as you do not need to lift the rope as high to fully cock the 360. You can also decock the unit by removing the arrow, and pulling the trigger (the anti-dry firing mechanism will not allow the crossbow to actually fire in this state). Then you simply place the cocking rope into the PCC, and with tension on the bowstring, manually release the anti-dry fire system, and gently let the tension off the limbs. It sounds a bit complicated, but is actually quite easy.

What Arrows to use with the MXB-360

Each MXB-360 comes standard with three 22” arrows. As with other Mission models that lack a stirrup, you may want to consider some of the more standard 20” arrows given that the longer 22” arrows may allow the mechanical broadhead to protrude too far off the end of the rail and possibly come into contact with limbs in tight hunting areas. As with many crossbows, it is critical that your arrows utilize an aluminum half-moon nock so the power from the bowstring doesn’t destroy the traditional plastic nocks.

Mission offers a lifetime warranty for the original purchaser on everything except for wear parts. You will need to register your unit online, but the process is simple and straight forward. Keep in mind that cosmetic ‘character marks’ that you might unintentionally add while in the field are not included in the warranty.

The Carbon Express Deluxe Case is soft case choice which will hold the Mission MXB 360 nicely for around $70. The Allen Company case is another soft case choice for this crossbow; however, this case is less than half the price.

The MXB-360 is overall a well built, lightweight hunting crossbow. It is easy to carry, easy to cock, and easy to use. Given how quiet the 360 is, there is no doubt that you will have a successful hunt as long as you can get close enough to the game! The safety is a bit awkward and the trigger has a bit more travel than I would like, but neither of those would be a deal killer. With an MSRP of $899 for the crossbow only, this certainly isn’t the crossbow for everyone, but if you don’t mind paying a bit more, you are going to really enjoy your purchase. Take a look at today's amazon.com price on this crossbow.